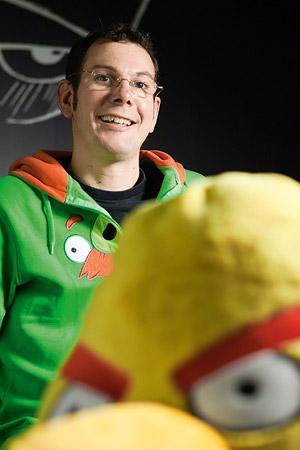 Sylvain Cunzi, 40, Lead programmer: ”Rovio knows that the most valuable asset that we have are the talented people here”

My passion for computers started the first time I laid hands on one, about thirty years ago.  The new computer era was just beginning, and there weren’t too many games around. I was playing games like Space Invaders, things that got me started thinking about programming. I was excited to learn more about the technical side of things, so I decided to study computer science in France.

I’ve been working in the game industry for seven years now, mostly throughout France, but I wanted to try something new and work abroad. I was looking for a job for a couple of months and I heard Rovio had a position that might be a good fit for me, so I applied.

The working environment here is fantastic. Everyone is passionate about making high-quality games, and enthusiastic about sharing that passion. I’ve only been here six months but I feel like I’m part of it, like I’ve been here a long time. Everyone here is very friendly and focused on making the best games.

We have lots of exciting things in the pipeline. Most recently, we released Bad Piggies, which shot to the top of the US iPhone charts within hours of release.

Rovio knows that talented people are its most valuable asset, and creating a great working environment is a top priority. We have a lot of activities outside work as well, such as wall climbing, board games, etc. We also have a movie theater here in the office, where we watch movies or play video games.

In my work I really enjoy the technical challenges. It’s inspiring to be part of this great team and help the company grow.

Following the Angry Birds success, Rovio has grown hugely and the multifaceted entertainment house currently employs more than 500 professionals in its headquarters in Espoo, Finland, and offices in Tampere, the United States, China, and Sweden.